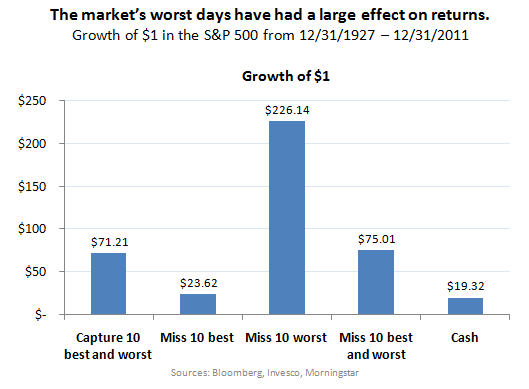 The importance of having a strong defense is important not only in sports, but in investing as well.

If you follow the conventional approach known as “Buy and Hold” where you sit on your investments and take all the bad days with the good, your $1 grows quite nicely, to $71.21. If, however, you were unlucky enough to miss just the 10 best days in history, your returns plunge to only $23.62, which isn’t that much better than sitting in cash, which grew to only $19.32.

This is the biggest reason why the conventional advice of staying in the market at all times, which is given by most advisors, makes sense.

But the part you’re often not told is what happens if you miss the 10 worst days. If you were fortunate enough to do that, your $1 would have grown much larger than $71.21, and instead would have grown to $226.14.

I wanted to see if there was a way to enhance returns by finding ways to avoid those big losses. And it turns out there is.

As any experienced trader will tell you, the primary rule when it comes to trading is “Do not fight the trend.” Every major disaster that has ever occurred in the financial markets came during downtrends. It therefore makes sense to have a defensive strategy when the markets trend negatively, either through a smaller allocation to stocks or having a covered call strategy, which I described in detail in my previous post, How To Make Money When Stocks Don’t Go Up, or both.


Here are the two sources that back this reasoning: this academic paper, and this paper that looked at the efficacy of such an approach going back over the past hundred years.

To save you time, the papers basically say this: when it comes to the stock market, people move around like herds and their actions carry some momentum, and because of that, markets tend to move in long term trends, such that when the stock market goes up over a 12 month period, it’s highly likely that it will go up the next 12 months. Conversely, when markets go down over a 12 month period, it’s highly likely that it will go down the next 12 months. So there’s a critical point when over a 12 month period, stocks tilt from a positive movement to a negative movement. I call this the Tipping Point. And history shows that once this tipping point is reached, the likelihood of markets falling significantly rises. This is the point at which all the good cards in the deck have been played, and what you’re left with is a bunch of low value cards and a reduced probability of winning. And when that happens, it pays to reduce one’s risk by shifting from stocks to investment grade bonds.

Here’s what it looks like when you do that. You’ve seen this chart before: 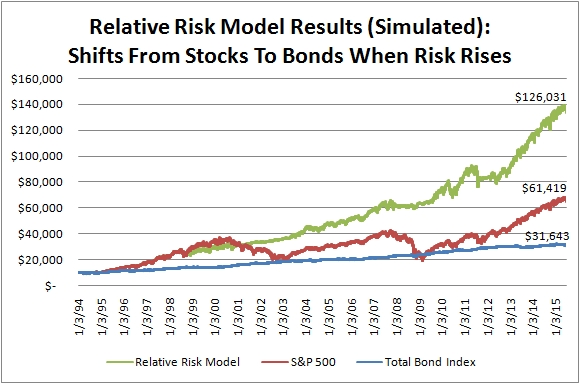 The line on the bottom is the return from investment grade bonds, the line in the middle is the S&P 500 with a buy and hold approach, and the line on top is the one that makes the shifts during these tipping points to go from stocks to bonds and back again.

As you can see, the approach that reduces stock exposure during poor risk/reward environments actually does significantly better over time because it avoids some of the biggest disasters. By going slower, you can get to your financial destination faster. Or, said differently, by playing good defense, you actually improve your offensive numbers. Defense wins games.

So where are we on the risk/reward spectrum, and what does the tipping point model say now? It is currently defensive, after tipping negatively late last year (click to see a larger version): 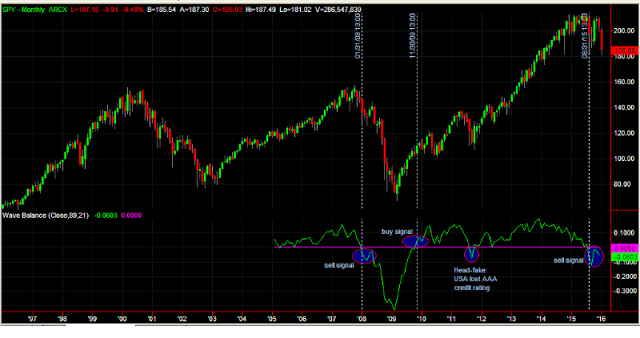 Based on this, it can be argued that we are in a poor risk/reward environment and that we have potentially entered a period where returns for the market will be poor or subdued.

In environments like this, reduced equity exposures and larger bond exposures is the path I am taking for my clients, and for those with equity exposure, I am using covered calls whenever possible. The covered calls help slow the rate of descent. And like I explained earlier, it’s like renting out your stocks:

a) in flat markets, you win and keep the 8% rent
b) in down markets you win by having a smaller fall
c) if the markets are down only modestly (less than 8%), you have the opportunity to have a gain.
c) if markets are up less than 8%, you win again since your rents outstrip the market gains


I did this back in December for clients, based on what I saw in the markets, and while few could have imagined the extent of the disaster we were about to experience in 2016, using the lessons from history allowed us to stock up on sand bags and extra food to brace for the possibility of what was to come.

This is what clients hire me for. They don’t have time to make these analyses nor do they have the expertise, so they bring an experienced investment manager like me to navigate them through the ever-changing landscape of the markets and adjust their risk exposures accordingly. I have gone through three bull markets and two bear markets, and made money for clients during the 2008 financial crisis. I do not rubber stamp the process and just put clients in mutual funds and then move on, which is unfortunately how many people end up being invested. Clients get custom tailored portfolios that have mechanisms in place to protect them from the big disasters. Because as we’ve seen, in the end, it’s defense that wins the investing game.