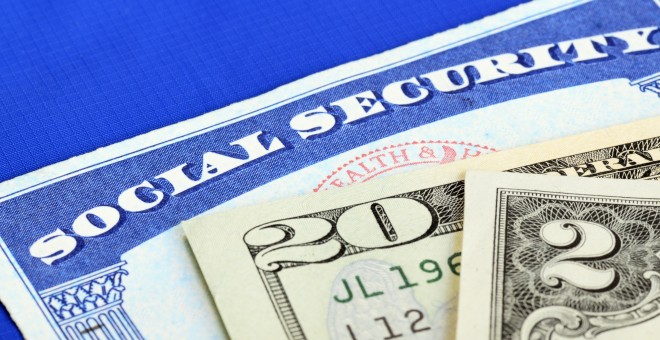 I was asked by a client if she and her husband should take Social Security benefits as early as possible because of the widely held expectation that Social Security would eventually run out of money during their retirement.To help clarify a bit of confusion around the subject, it’s expected that under the current trajectory, the excess money that Social Security generates will run out in about 17 years, and once that runs out, it doesn’t mean that retirees will get nothing as of 2034 – it just means that the program will only bring in enough money to pay about 77% of promised benefits.

My client’s question was a very good one, and since I wanted to see for myself what the numbers would look like, I ran an analysis for them to see what would happen to one’s Social Security payments under various scenarios:

I used an average monthly benefit as a starting point, and even though it may not match with your payments, the illustration may still be helpful, especially for people who are able to live to their 90s (my clients were in good health and the results from this online life expectancy calculator from Abaris indicated they were reasonably expected to live to their 90s). If your projected life expectancy is much shorter, these results may not apply to you. I am sharing these results so readers can have a rough estimate for how lifetime benefits are affected, even with cuts to Social Security.

What did I find out? The short answer is that even with possible cuts to Social Security, it will still be more beneficial to delay your payments as long as possible, since every year you delay, your lifetime benefits are still higher than if you took Social Security early.

Here’s the table of monthly benefits, depending on what age you retire. I used an average monthly benefit based on the book “How to Retire with Enough Money”

I then took the payments and projected them out to my clients’ estimated life expectancies, and along the way, made the possible cuts to Social Security benefits at 2034, when they’re expected to fall to only 77% of the original payouts. In all cases, cumulative lifetime benefits still increased with every year they delayed taking Social Security (no cost of living adjustments were added).

Here’s how it looks for someone expected to live to 91: you can see that by taking Social Security payments as early as possible at 62, even though you have more years to collect payments without cuts, the cumulative lifetime benefits still were lower than if you had retired later. Notice how each year you delay, your total lifetime benefits are still higher, even with projected cuts to Social Security: 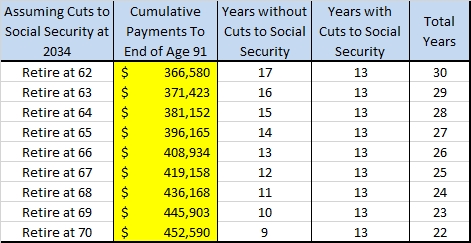 The lesson here is that it pays to wait.