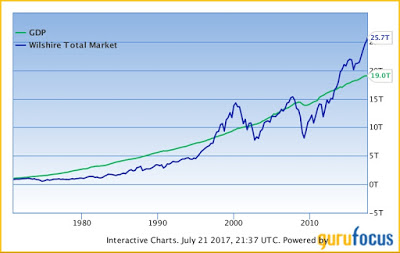 Markets just don’t seem to go down anymore, and valuations don’t seem to matter anymore either. And that makes this one of the most unusual and uncomfortable markets I’ve been in.

I call this market the Contrarian Killer. That’s because every valuation metric that mattered in the past that had led to a precipitous decline in the market whenever it had been exceeded has failed to work. And that makes people like me – who believed that caution was warranted because of the belief that markets revert to the mean – wrong, at least for the time being. Even short-sellers are giving up.

Take for example, the Market Capitalization-to-GDP ratio, known as the Buffett Indicator. Warren Buffett described it as “probably the best single measure of where valuations stand at any given moment.” This indicator takes the market value of all the stocks in the US (the “market cap”) and compares it to its GDP. Over the past 40+ years or so, the value of all stocks roughly stayed around 75%-90% of the value of GDP, with occasional bouts of exuberance causing the market value of stocks to go past the value of GDP. Every time it did, however, the market eventually pulled back and valuations reverted to the mean, with painful consequences for stock market investors. Here’s a look at the current market value of all the stocks in the US compared to the GDP (source):

If we break down the historical levels of Market Cap-to-GDP, we can make some generalizations about valuation levels (source):

As of July 21, 2017, we are way above trend and have hit historically dangerous levels. And if one looks at the corresponding returns that are projected when valuations are this elevated, future returns are expected to be negative (source): 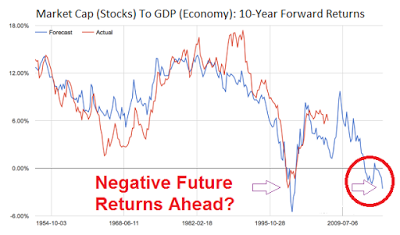 In addition, cash levels are at record lows, and as cash levels are contrarian indicators (high levels are bullish because it signals pessimism and weak hands have sold, while low levels are bearish because no ammo is left to drive markets higher), it’s signaling that greater caution should be exercised at these levels: 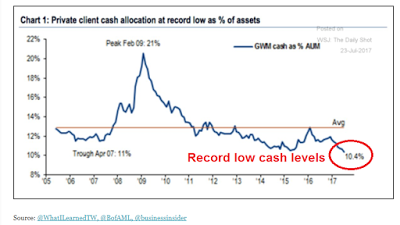 But that hasn’t stopped markets from advancing further.

Interestingly, at these heights, markets have become even more resilient and resistant to damage than ever before. In late June, the market had fallen in excess of 0.70% only twice over the past half year, which put us on pace to have only four down days this year in excess of 0.70%. Statistically speaking, according to Eric Parnell, CFA, an event like this only happens once every 1.1 billion (with a B) years (source).

This suggests to me a number of convergent factors are possibly taking place:

1) Investors are entering a manic phase in which they don’t want to miss out on the expected upside in the market, and are buying every dip possible as an opportunity to get invested.

2) A very popular bull market strategy of buying 52-week highs is being adopted by both investors and trading algorithms, which triggers a new wave of buying every time the market reaches new highs. This is usually done with little regard to market valuations, as it is a trend following strategy whose only driving factor is the price itself.

3) Or it could be something completely different that is infrequently accounted for. Take, for example, the behavior of central banks around the world. Ever since the Financial Crisis, central banks have been buying bonds in a quest to drive interest rates lower in order to spur more borrowing, and by extension, higher spending on capital investments to increase the rate of economic growth. While the Federal Reserve has stopped expanding their balance sheet and is in the beginning stages of shrinking it, the two other sources of bond buying are still at it full speed. Here’s a look at the combined balance sheets of the major Central Banks around the world (Federal Reserve, European Central Bank, Bank of Japan): 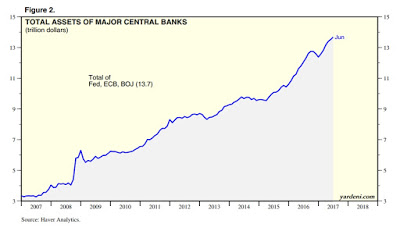 Lower interest rates from the bond purchasese didn’t have their intended effect, however. Instead of increased capital spending, low interest rates drove companies to take on debt in order to buy back shares of their stock, which pushed markets higher: 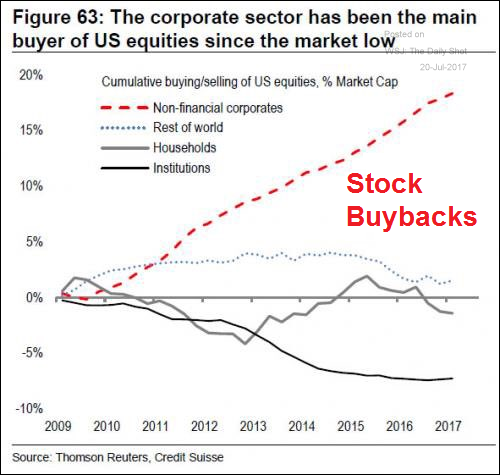 In addition, US stocks have seen massive buying from the Swiss National Bank, which has used its massive foreign currency excess reserves to buy over $60 billion in US stocks (source): 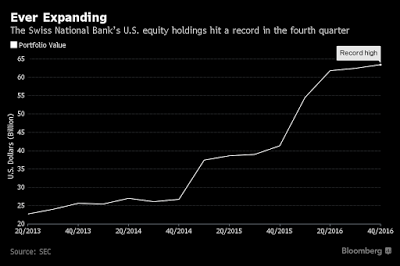 Basically, we’ve got a lot of forces driving market valuations higher, and a big part of it seems to be stemming from central bank behavior to drive interest rates artificially lower. This has shifted the focus to central bank behavior as the primary driver of stocks, and has created a convoluted circle in which strong economic news is good for earnings, while bad economic news is good for market valuations because of the perceived continuation of loose monetary policy to keep interest rates low and stocks as the only place to invest. This is why valuations don’t seem to matter, because heads, you win, tails, they lose.

My hypothesis is that valuations will matter and will revert to the mean once jobs growth falters and turns negative. Valuations alone didn’t cause the last two stock market bubbles to collapse (they only affected how hard the market would fall). It was the loss of jobs that stopped the engine of consumer spending, and with consumers making up two-thirds of the economy, when spending fell, earnings fell, and so did valuations.

The good thing is, job figures are still nicely positive:

…and as long as it stays that way, history suggests this market will have the energy to sustain itself through the occasional correction, despite valuations. In the meantime, the key factors we are watching out for are higher interest rates (which will slow down the consumer and increase recession risks), a shrinking of central bank balance sheets (which will raise interest rates and curb the cycle of stock buybacks), and any other signal that the consumer is getting tapped out. This latter factor is already starting, as credit card delinquencies are on the rise for the first time since the last recession:

In this environment, we are hedging our bets by maintaining a fairly balanced allocation between stocks and bonds to take advantage of the potential for the continuation of this bull market and to protect against the danger of extreme optimism and high valuations. Once jobs figures falter, our plan is to reduce our allocation to stocks and shift it to investment grade bonds to weather any potential storm.