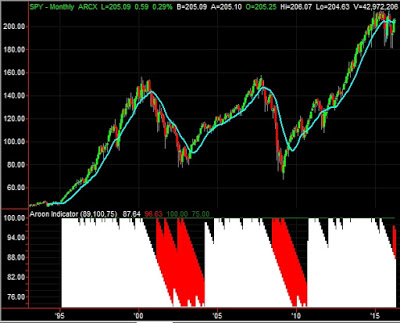 Sometimes it’s better to just not look – at the media, the papers, or whatever – when it comes to the stock market. Because the first quarter was one of the more crazy ones we’ve seen. Apparently, the 11% decline in January followed by the 13% rally in March marked one of the biggest comebacks in stock market history, the biggest since 1933. It’s just not in anyone’s range of expectations.

We had swings like this just back in August to October 2015. It’s not normal, because these aren’t normal times, and the market is nervous.

Let’s take an aerial view of the market and get away from the noise. Here is a monthly chart of the S&P 500. I have plotted a 1-year moving average on top of the price chart, and below, I have a nice little trend indicator that determines the strength of the trend (when White is on top, the tendency for the market to trend upward is stronger, and when Red is on top, it means the tendency for the market to trend downward is stronger).

What we see from this is the following:
1) The massive upward trend we had from 2010 leveled off in 2015, and now the 1-year moving average has moved from a positive slope to a negative slope.
2) The strength of the trend has gotten weak.
Here’s what’s driving it:
A great Seeking Alpha article by Owen Williams, CFA, has this graph that shows how the trend in the S&P stock price has diverged significantly from its underlying earnings:

No matter how you spin it, the fundamental truth is that stock prices are driven by earnings. You can see the correlation in the chart. But notice how around early 2015, earnings (shown here as EBITDA) started to move downward, but the market continued to try to fight to hold on. It’s a fight that earnings will likely win over time.

And I agree with his quote:


“A widening decline in earnings is no recipe for higher prices in a seven-year bull market weeks away from becoming the second-longest in history.”

And what makes it additionally unusual is that “flight to safety” or “risk off” assets have rallied at the same time as the “risk on” assets. Bonds and Utility stocks have had a strong run, which usually tends to happen in environments when riskier assets like stocks are getting sold off. The market is both afraid and courageous at the same time.

Conditions like this increase the probability for downward moves in the market once the relationship between stock prices and earnings starts reverting back. Sure, the market is hopeful that earnings will make a strong rebound, but the run in stock prices seems to have already discounted that possibility. It’s kind of a crowded trade due to what I call the FOMO rally – the Fear of Missing Out, and unfortunately, crowded trades aren’t shown to be particularly profitable.

One last important note worth mentioning: back when we had Alan Greenspan and Ben Bernanke as Federal Reserve chiefs, their tendency to do whatever it takes to prop up the stock market whenever it fell earned them a special phrase called the “Greenspan Put” and “Bernanke Put.”

In stock option terminology, a Put gives you the ability to sell your stocks at the higher price before it collapsed. Greenspan and Bernanke kept driving monetary policy to be supportive of stock prices whenever it fell, and like magic, the stock market came back to pre-tumble levels, which gave the market the impression that they got a free Put, hence the Greenspan Put and Bernanke Put.

Now we’ve got Janet Yellen, and she needs to bring interest rates back to a normal level, because as long as they’r near zero, the Fed doesn’t have that many policy tools left in its arsenal to prop up the economy should we enter a recession. So it’s in her best interest to raise rates back up at every sign the economy shows some kind of sustainable strength.

This has the Wall Street Journal talking of the “Yellen Call” (a Call is the opposite of a Put). As the economy shows more strength, interest rates have a greater likelihood of going up, and historically, when rates rise, it provides a headwind for the stock market.

All of the above leads me to continue having a defensive posture. We will continue to have more conservative allocations to stocks, and when possible, use covered calls to just “rent them out” and earn income as time passes and get some additional downside protection.

Remember, when it comes to investing, there are two sides to the process: what you make, and what you don’t lose. We are keeping a very close eye on helping reduce the possible effects of the latter.