It’s been said that markets take the stairs up and the elevator down. Now that the market has fallen another 1,000 points and hit correction territory (a fall of 10%) within just one week, fear has come roaring back after being in hibernation for what seemed like years. This is a good thing, because historically, whenever we’ve reached peak fear levels, that has tended to provide attractive entry points. It would be great if we could visually track investor sentiment over time, and thankfully, CNN does just that for us with the Fear and Greed indicator. After today’s plunge in prices, here’s where we stand: 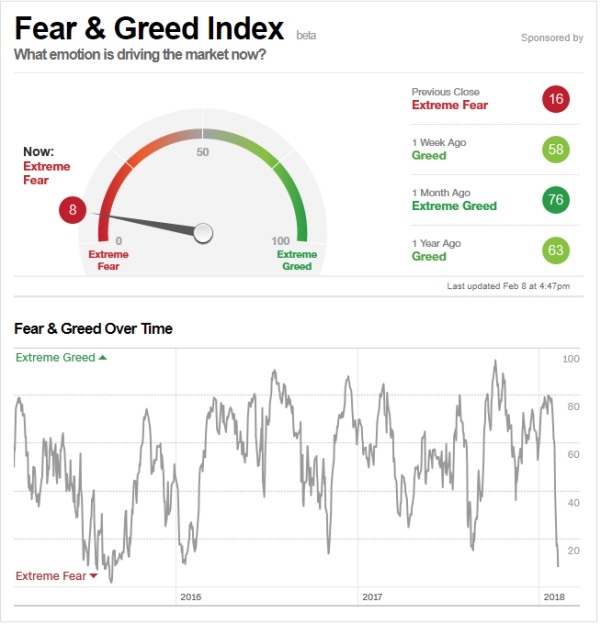 If you look at the areas where we’ve fallen below 20 and compare it with the chart of the stock market, you’ll find that these areas have historically been attractive entry points. Granted, 2018 is a different environment than 2017 and 2016, in that valuations breached peak-2000 levels and leverage and margin loans hit all time highs. With trend-following systems having brought us to heights greater than we ever could have expected, the very same trend following systems have the potential to bring us back down and beyond any lows we could possibly expect. Firmer support levels for the market are only about 1.5% lower, which is where the 200 day moving average is. Now if we end up experiencing an even sharper decline, like to the 200 week moving average (which is where we got close to in early 2016), then there is a possible worst-case scenario of having a further 15.6% decline. I see that as being less likely given how quickly we’ve hit the extremes in fear territory. In addition, the economy is quite strong, jobs growth is strong, and S&P 500 earnings growth is strong with the recent cuts to corporate taxes. These are all ingredients that have historically driven the market higher. All of which leads me to believe that the odds are becoming more favorable for investment gains in the short term.

How long do we have to wait before the market bottoms? If we look back to the past 22 corrections and 14 bear markets since World War II, the average length of time that markets declined was four weeks and the average decline was about 13%: 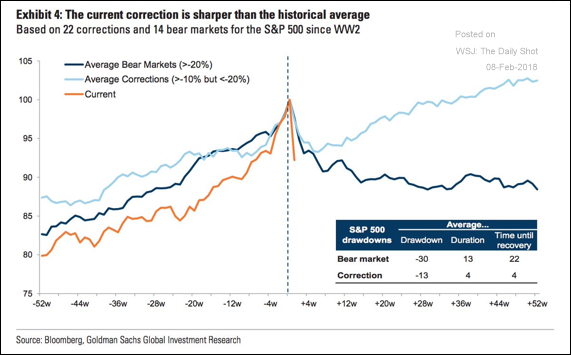 We are now about to complete week two, so if history is any guide, we’ve potentially got about two more weeks of rough sailing before the clouds part. In the meantime, we’re going to use this as an opportunity to make a wish list and then go shopping if the price is right.