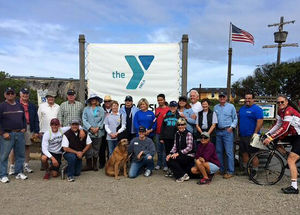 Local Coronado newspaper, The Eagle, had a great article about Rotarians at Work, an event held every April where Rotary Club members around the surrounding community helps out with some form of community service project.

RAW was begun in 2006 as a joint effort between two Rotary Districts (one in the U.S. and one in Mexico) and continues to grow every year.  Each year clubs around the  world identify a hands-on project that all members can participate in to help their local community.
The Coronado Rotary Club identified three significant projects and members chose to go  to either one of the three Coronado Schools, YMCA Camp Surf in Imperial Beach or San Pasqual Academy in Escondido.


Debby Syverson, project leader for San Pasqual said “it was a true Rotary Fellowship day with several other district clubs participating as well as a University of Michigan Alumni Club joining in.”
Rainier Trinidad, who will be 2016 RAW Chairperson for Coronado Rotary, put it in a nutshell. “ The one thing I love about RAW is that you have all of these people, who are often leaders or in senior positions in their field, and when we’re all in our work clothes, everyone is all  on the same level just working toward a common purpose.  It really does bring people  closer, and you wouldn’t get that opportunity unless you were a part of a service organization like Rotary.”


RAW Chairperson Rugee thanked all the committee members, the team leaders and all the workers for making 2015 Rotarians At Work Day a success.