One thing that has become very popular lately is the “fire and forget” type of investment vehicle called Target Date Funds (TDF). These are funds that invest your savings according to your time horizon: the longer the time you have before you need to draw upon your investments, the larger and more aggressive the TDF’s allocation is in stocks relative to bonds. The less time you have, the smaller the stock allocation becomes. This gradual shrinking of the equity component of one’s overall portfolio is known as the glide path, and it looks something like this (source):

This is because of the historical tendency for stocks to be more volatile, in exchange for a higher rate of return. In any given year, stocks can go up or down 20% (though many late to the game wouldn’t believe the latter is possible), in exchange for an average annual rate of return of 9.60% going as far back as 1928 (source).

Using this back-tested data, financial institutions came up with a way to get people to leave their investments alone and let time do the work by marketing the advantages of a long term approach to investments. As long as people continued to make contributions and didn’t sell out during periods of market panic, the process worked beautifully. The process of dollar cost averaging meant that during weak periods in the market, participants were able to buy more shares when future expected returns were higher (like in 2009), and during strong markets, when future expected returns were lower (like 2015), they bought fewer shares.

And the more investors sat and left things alone, the better they tended to do because they didn’t succumb to the usual cycle of fear and greed… 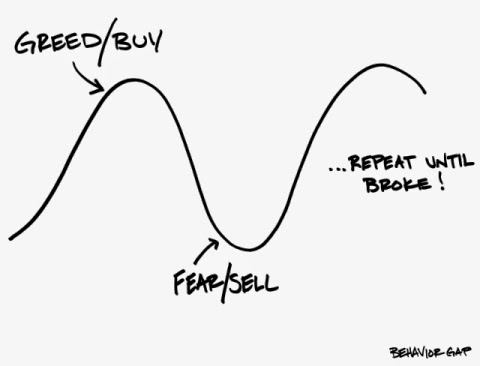 …which results in what’s known as the Behavior Gap, the observed phenomenon where investor returns tended to do worse than what investments returned : 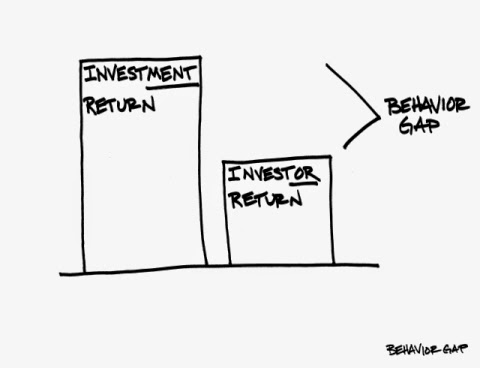 All this is GREAT. But it suffers from a critical shortcoming.
But first, an analogy. Remember the BMI, the Body Mass Index? Many mindlessly use it to gauge a person’s health (underweight or overweight), based on their height and weight. But to the BMI, a person who is 160 pounds, exercises, eats well, and has a lot of muscle is exactly the same as the person who is 160 pounds, eats poorly and doesn’t exercise at all. That’s just stupid because it ignores the composition of the person’s weight, specifically, the percentage of fat and muscle that makes up that weight.
In a way similar to how BMI ignores body fat percentage, Target Date Funds merrily hum along every year and ignore the valuation of the stock market. A 60% equity weight can be given regardless if the market’s P/E is 10 or 25. We only need to go back to 2000 and 2008 to remind us of the effects of extended market valuations on future returns. But to Target Date Funds, it doesn’t matter.
The way we approach the stock market at Parabolic, we shrink our equity allocations during highly speculative periods like the one we’re in today, making sure that clients don’t have more than a neutral allocation or more than their risk tolerance warrants.
Why do we reduce equity allocations when markets are expensive? Because there’s good research that supports the common sense notion that expensive markets give lower future returns and cheaper markets give you higher returns. Our previous post (here, point #2) that shows the graph of the CAPE Ratio and the following 15 years of returns displays this evidence: 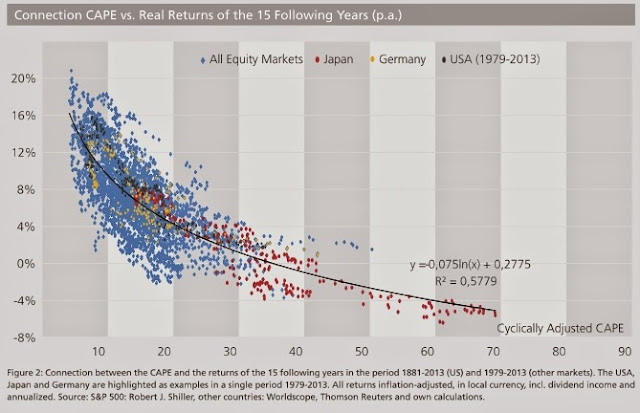 One of our key tenets is that by playing good defense, you actually improve your offensive numbers, and this article here illustrates nicely the potential for higher returns by being fearful when others are greedy, and being greedy when others are fearful (a quote attributed to Warren Buffett). Target Date Funds do not change course (aside from their planned glide path) when valuations reach historically dangerous levels. And that is its biggest flaw.
Many portfolios we come across often are over-allocated to equities at the moment because of the market’s six-year run, and they haven’t been reassessed and realigned with their risk tolerance. Good times can make people think it doesn’t matter. But that’s when it matters most, because when markets fall, that’s usually when people realize they’re not as comfortable with risk as they thought. By cutting down an over-allocated equity portfolio, if the market falls, they will get hurt less and the ride toward their retirement will be smoother and have fewer bumps along the way.
Contact us today for a free consultation at (619)-888-4070 to get your portfolio assessed, and get answers to questions like:
How much should you have in equities and fixed income?
How can you protect your portfolio if the market heads south?
We’ve been doing this for 15 years, and we have the experience to guide you through this extraordinary and increasingly volatile financial market.
(Posted March 23, 2015)
——————————  About Parabolic Asset Management  ——————————-
Fee-Only. Fiduciary. Cost-Effective.

• No Conflicts Of Interest: You get unbiased advice because we don’t sell commissioned products. Fee is 1% of AUM (learn more).

• Your Interests Come First: We are held to the Fiduciary Standard, not the Suitability Standard.

• Avoid High Expenses: Index funds have up to 90% lower fees than actively-managed mutual funds and outperform them over the long term. Don’t own them? You may be paying too much.