I started out this post thinking I would bombard you with lots of shiny graphs, squiggly lines, and juicy fun-facts about the stock market and why my views on the stock market in 2015 aren’t that rosy.

But according to research, more is not better, at least when it comes to information.

“Every study we could find concluded that “Information overload” was only good for adding perceived certainty rather than actual accuracy.  In other words, more information will fool you into thinking you are correct even when you are absolutely wrong.”

“Those handicappers who only received 5 pieces of information did better at predicting the race outcomes than those who were given 40 facts (including the 5).  As with the previous study, the group with 40 facts was more certain about their wagers, even though they proved less accurate. (Mauboussin 2007).”

The key here is to limit your information intake to just 5 key pieces of information, because more information doesn’t make you a better decision maker. It just makes you more certain of your answer, whether it’s right or wrong.

So here are the 5 most important pieces of information I think you should know for 2015.

1. The market’s valuation based on the CAPE ratio is elevated

Robert Shiller famously used the cyclically-adjusted P/E ratio to call for a market decline back in 2000. Yes, some flaws in the CAPE ratio have been pointed out due to changes in accounting principles, but there is no question that markets have experienced an unprecedented run, to the tune of about 24% annualized returns since the bottom of the market in 2009. It’s nice that everyone is getting richer, but that is not a sustainable rate of growth. Here is what the current CAPE ratio looks like (source): 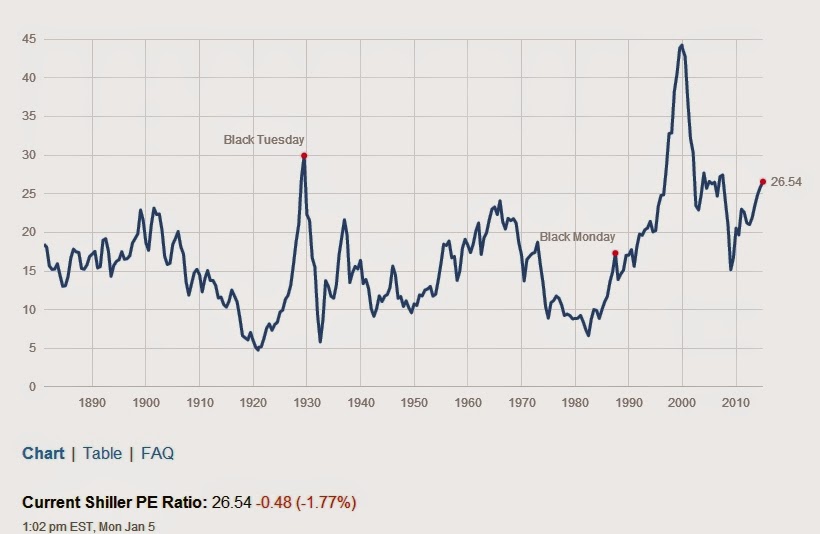 Markets have historically traded around a CAPE of about 16 (source), but I think there may have been a permanent shift in people’s acceptance of stock market risk as a required component of their retirement plan. This greater acceptance of the stock market has likely shifted the boundaries higher for what is considered a low and high CAPE ratio. (For added perspective, take a look at the “Buffett Indicator” that looks at the ratio of the market cap of the entire stock market vs GDP. Markets are valued at 2 standard deviations above the mean, well above the housing bubble peak in 2007.) 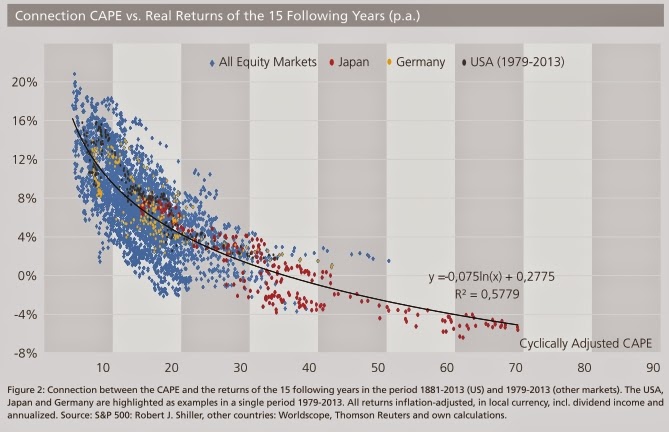 Does that sound low? It’s not something we’re used to thinking, but when you look back at the returns for the S&P 500 since the March 2000 peak to September 2014, stocks have returned a little under 2% a year for the past 14 years. It’s not out of the question to imagine similarly uninspiring returns given the elevated levels of the market.

3. The Federal Reserve has provided an unprecedented level of support to the stock market

Before the Financial Crisis, the Fed’s balance sheet had been stable, but with their so-called Quantitative Easing (QE) programs to save the economy, the Fed purchased bonds at an unprecedented rate to bring interest rates down to artificially low levels. The low interest rates have redirected people’s savings from CDs into the stock market, with the Fed thinking that the higher the market goes, the more wealthy people will feel, which will encourage future spending and economic growth. Basically, this growth in the stock market has come at the expense of savers. 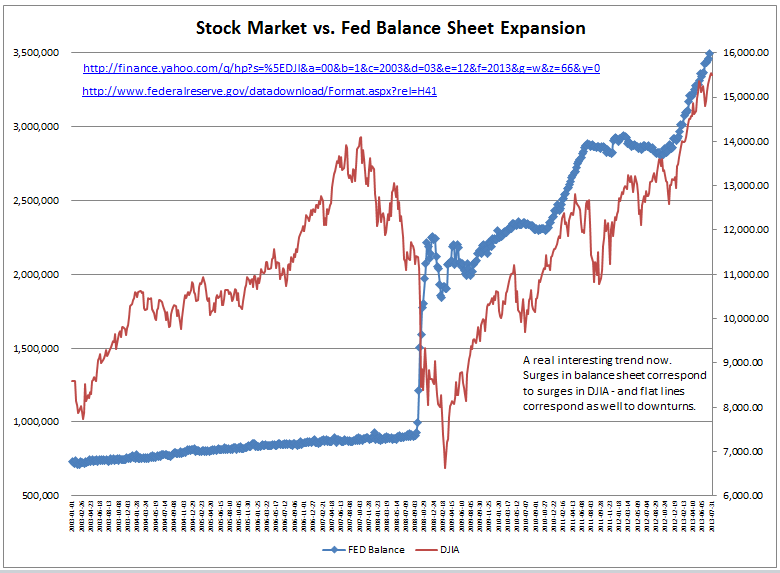 It’s worth noting that after QE1, markets dropped 13%, and after QE2, it dropped 18%. Who knows if the aftermath of QE3 will end similarly, but history shows the market follows liquidity moves by the Fed, so some caution is warranted in the following months after the Fed ends its support.

4. Recessions (kind of) relate to bear markets, so pay attention to the jobs growth figure

“Since the inception of the S&P 500 in 1957, there have been 9 recessions and 9 bear markets (20% or greater declines). However, three bears were not associated with recessions, and three recessions happened without a bear market, although the 1990-1991 recession had the ultimate “near” bear with its 19.9%.”

When the jobs growth number is turning negative, that’s when recession risk (and therefore, bear market risk) rises. Taking a look at the current figure, we are pretty healthy: 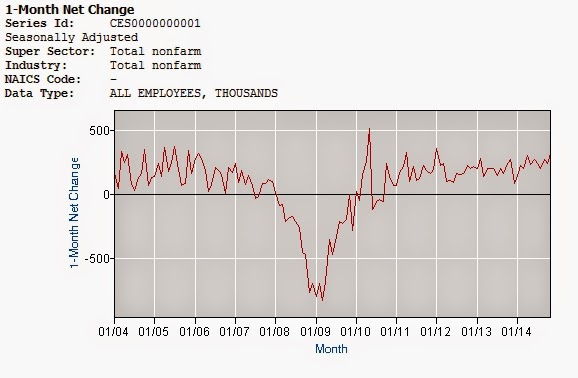 5. The longer markets go without a correction, the more hazardous the markets will become when the turn comes

Academics, traders, and investors are a backward looking lot. Research is based on what the markets have done historically. Over the long term, that’s how we know stocks are better investments than bonds, small cap stocks tend to outperform large cap stocks, and value tends to beat growth over time. But over the short term, there is evidence that when markets rise the previous year, it will do so again the following year. It’s called momentum. People feed off recent price behavior to project the future.

So when you have a chart that looks like this: 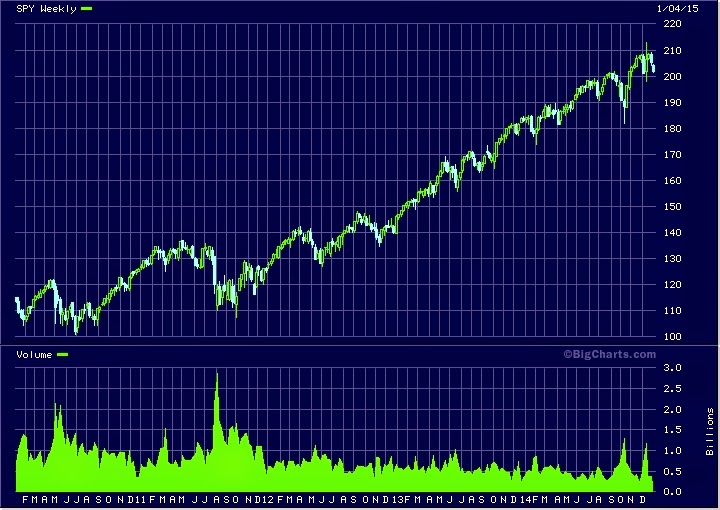 …people quickly learn that each dip is followed by a surge to new highs, thereby inviting more speculators who are proven correctly that the market (or the Fed) will save you every time it falls. This invites greater confidence and even more speculators, some who will borrow money to buy even more stock (called margin debt). As the trend gets stronger and gets more defined, backward looking models will increasingly show the profitability of trend-following strategies, and more people will pile on again, using the trend as the primary signal to enter or exit the market. Overseas investors will see how the US market is the only game in town, and they too will join the ride (after all, international markets are currently quite poor and money needs to go somewhere to park). It’s a self-sustaining cycle, and one that increases the danger to the market once the trend does eventually turn.

When the self-correcting mechanism of the markets is suppressed, it invites dangerous behavior. Take a look at margin debt levels (source). It is higher than any point in time, even higher than the dot-com and housing bubble peaks! 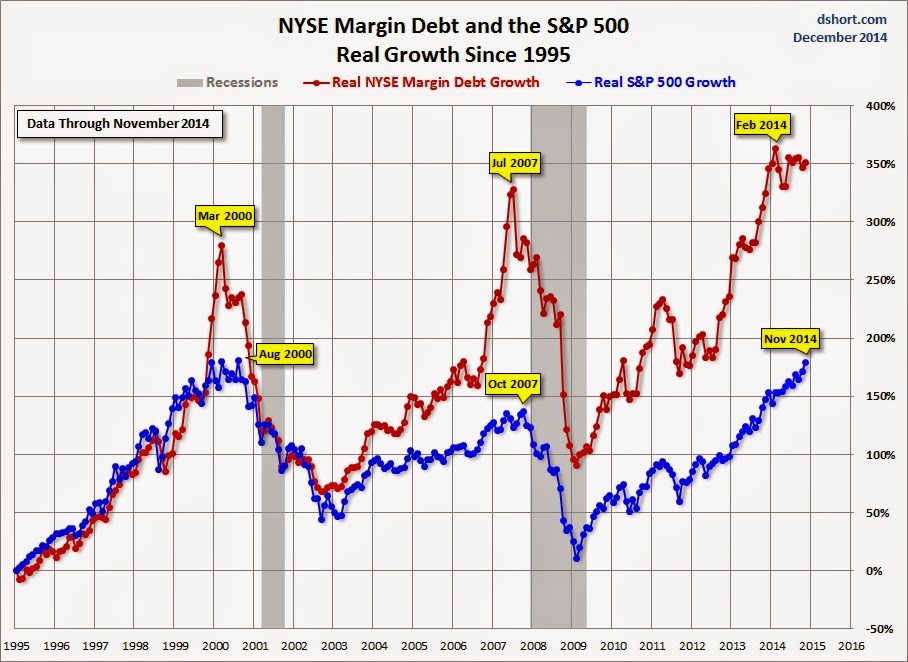 Many years from now, we’ll all look back on this data and say, “Oh, it was obvious! Of course the stock market was overvalued! Look at all the signs!” But that hasn’t stopped the market from going higher and from people putting inappropriately large allocations of their portfolio toward US stocks.

Despite all these warnings, markets are notorious for running many years beyond what is considered a fair value. All you can do right now is to make sure your asset allocation reflects the appropriate amount of risk you are able to take. By doing this, you change the focus from An Uncertain Output to a Certain Input. Realize also that people tend to say they’re more willing to take risk when the going is good, but when the going gets tough, their real risk tolerance comes out, and it’s usually a lot less than what they thought they were comfortable with.

At Parabolic, we are cognizant of the hazards in this market, and have measures in place to both ride out this advance and to limit our exposure once it’s over. Remember the lessons of the past: while it’s good to make money, it’s more important to have a process in place to keep it.

• No Conflicts Of Interest: You get unbiased advice because we don’t sell commissioned products. Fee is 1% of AUM (learn more).

• Your Interests Come First: We are held to the Fiduciary Standard, not the Suitability Standard.

• Avoid High Expenses: Index funds have up to 90% lower fees than actively-managed mutual funds and outperform them over the long term. Don’t own them? You may be paying too much.