There is an ironic blessing, which some consider a curse, that goes, “May you live in interesting times.” The implication is that uninteresting times are usually marked by peace and tranquility, and are therefore more preferable to interesting times, which can often be characterized by upheaval and surprise.

With the state of the political landscape, economy,  and the stock market, it’s arguable that we have indeed entered an Interesting Time.

Donald Trump inherits a stock market that rose 166.3% between Obama’s first day in office and the close of trading Thursday, his last day (source). The stock market is near all time highs, and valuations on a Price-to-Sales ratio basis are the highest they have ever been, even higher than the 2000 dotcom bubble and the heights of the market in 2007 before the Financial Crisis (and if you enlarge the graph, you can see the historical returns such valuations have provided in the past: 0.36% per year):

I find it interesting that at these levels, the financial media and investors are speculating that we will have a Reagan-style unleashing of a new bull market in stocks (never mind that it officially never ended) after a 2-year consolidation, thanks to the expectation that Trump will slash regulations, cut taxes, and spend $1 trillion to rebuild the nation’s infrastructure. From a sentiment standpoint, this is what Greed looks like.

The question I grapple with is, at all time highs, do we have the ingredients for a further expansion of the market’s valuation multiple? (remember 1998?)

I tend to be a mean-reversionist. Successfully executing $5 billion of statistical arbitrage trades over 10 years and witnessing the tendency for markets to snap back to average valuations from overvalued or undervalued levels tends to convince you of its enduring nature. But I’m also seasoned enough to know that one of the most enduring and money-making/loss-avoiding lessons of my career is this: the primary objective of the investor is to identify the path of least resistance and to stay aligned with it.

The quandary we find ourselves in is that the path of least resistance is up, but valuation levels are at the upper boundaries, suggesting sub-par returns in the future.

Let’s look at what the pricing models suggest for future returns:

Based on Worldwide CAPE ratios, here are expected average future returns for the major geographies over the next 10-15 years (source), which suggests 4% returns for the US and about 7-8% for international markets, which is why I  currently favor a more meaningful exposure to foreign equities:

Okay, so future returns are going to be pretty low. So what? Why do high valuations even matter? Because of the relationship between valuation ratios and downside risks (source): The more expensive markets are, the higher the risk and magnitude of potential losses.

When it comes to downside risks, it’s troubling that the market isn’t expecting very much. Volatility spikes tend to coincide with fear (and therefore short term market bottoms), while volatility lows tend to coincide with complacency (and more often with short term tops). Now take a look at the Volatility Index and compare it with the Economic Policy Uncertainty Index. The two have historically moved in tandem with each other: high economic policy uncertainty has often been accompanied by higher volatility, while low uncertainty has come with lower volatility. Interestingly, there has never been a greater disparity between the two, suggesting that the markets may not be adequately pricing in risk: 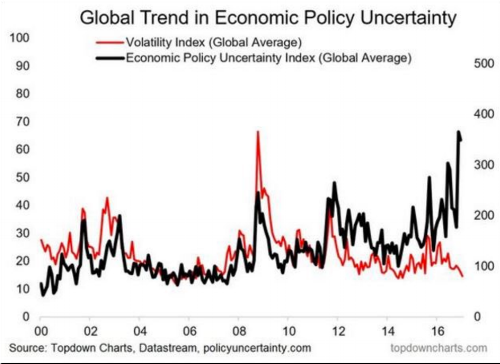 Given the potentially higher risk we face, the question is, how much should one invest in the stock market? The unconventional state of the market has made any attempt to hedge or protect one’s investments look foolish. Rising interest rates (the “Don’t Fight The Fed” model), an earnings recession and lower GAAP earnings (the relationship between earnings and stock prices) don’t seem to matter at the current time (which is dangerous), so what does?

I think what’s happening is that participants are becoming more heavily focused on trend-following models, and that means one of the most important factors driving markets is the price action itself. What this means is that a strong market feeds itself as the upward trend attracts more trend followers, while a weak market drives itself further down as trend followers exit. This suggests that upward moves and downward moves may become more sharp and more quick as participants believe they can head for the exits quickly before things get bad and get back in so they don’t miss out on the rallies. The evidence seems to confirm just that as the time it takes for markets to fall 5-10% and recover has shortened considerably since the Financial Crisis: 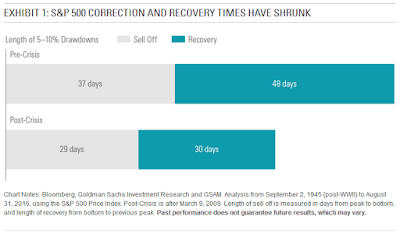 So what about bonds? Is that a safer place to invest?

Right now, investors hate bonds, or are just very afraid of it. The expectation is that Trump’s $1 trillion spending plan (while the economy is at full employment) and tax breaks will cause the US government to go further into deficit territory and cause inflation to accelerate, meaning that interest rates will have to rise meaningfully to compensate bond investors. The Fed has suggested they’ll be raising rates three times every year until 2019 (source). All of this means bonds are bad, right?

Back in November 11, 2015, I had this post about why you shouldn’t fear rising interest rates. In short, over 90% of a bond’s returns have come from the yield component, not the price component. The price component is what suffers in the short term and is what most investors are afraid of when it comes to losses, but the higher yield component is what largely affects your returns over the longer term. So from this perspective, it’s not actually a bad thing for interest rates to rise. A WSJ article illustrated the effects of gradual interest increases through 2019. In the long run, the portfolio that faces increasing interest rates provides a higher return than the one that does not: 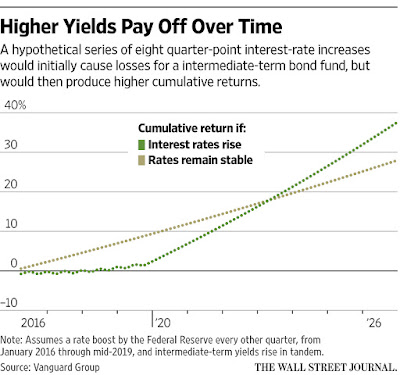 With sentiment for bonds at the lowest point since 2006 (source), history suggests that the short term future performance for bonds may be more attractive than feared, which is why it continues to make sense to have meaningful exposure to them in one’s portfolio. As a diversification tool, its usefulness also cannot be overstated: let’s not forget that during 2008, when the S&P 500 lost 37%, bonds returned a positive 5.24%. And given how this is the 4th longest expansion in the Post-WWII era (source), and the second longest bull market ever (source),  it certainly seems prudent to have exposure to an asset class that holds up well during periods of stock market and economic stress.

To conclude: markets enter 2017 with elevated economic uncertainty, record high valuations in the US, and a surprisingly low expectation of trouble ahead. It’s a configuration that suggests having a more meaningful exposure to international stocks due to more favorable valuations and to continue to stay diversified in bonds, despite (or rather, because of) the euphoria and high expectations built in for the US market.

If you found this information to be informative, please subscribe via the widget on the right, and posts will be emailed to you as they become available.