I just happened to be listening to an 80’s music compilation while reading about how Trump will bring about a new economic era of growth similar to what Reagan accomplished in the early 1980s. It’s a popular narrative in the financial press that’s easily eaten up by the 20-second sound bite world we live in.

While such an outcome would be nice, I’m going to give you a 20-second thought of my own and show you why that just isn’t very likely to happen. If you just compare the economic situation back in 1982 with 2017, you’ll see that Reagan had a lot of fat to work with. From a blackjack perspective, back in 1982, it’s as if all the low cards had been played and the only ones left were the high cards. Now in 2017, it’s more the opposite: most of the high cards have been played and now we’re left with a lot of low cards. Compare (source): 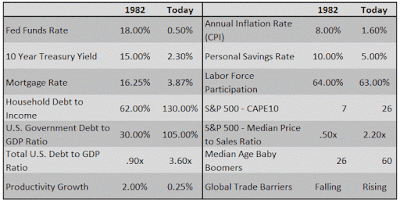 From the standpoint of maneuverability, Trump has far less to work with: stock market valuations are at all time highs (higher than the 2000 dotcom bubble and the 2008 housing bubble when looked at on a Price-to-Sales basis), interest rates that are just now starting to move up from zero, mortgage rates that face upward pressure, high levels of household debt, and the list goes on.
So while things sound great from the media’s perspective, it’s also important to look below the surface to see the reality we’re faced with. As tempting as it is, it’s not a good idea to get too caught up in the excitement and become overly extended with one’s exposure to stocks in one’s portfolio.