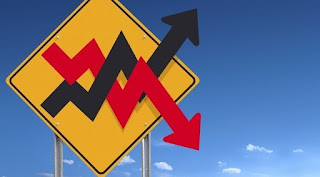 Here’s a quick recap of events leading to today:

A) Trump won the Electoral votes, Clinton won the Popular vote, the markets crashed overnight, then rebounded the following morning. Markets initially feared a contested election and a ripping up of trade agreements that would result in trade barriers, tariffs, and trade wars, then realized that Trump’s plan to spend up to $500 billion to fix the nation’s infrastructure increased the chances that our low-growth economy could shift into a higher gear, setting off a rally that caused industrial and economically sensitive financial stocks higher.

B) Safe haven assets like bonds sold off in the expectation that 1) lower tax rates and higher spending will result in large budget deficits, and in order for the US to fund these projects, they will need to go into debt by selling bonds and 2) the increased growth will trigger higher inflation rates, sending bond yields higher and hurting interest rate sensitive stocks like Utilities and Real Estate.

In effect, those who were invested in traditionally conservative investments got hurt as money flowed away from those assets in order to chase the promise of higher future earnings for industrial and financial stocks.

(As an aside, this is a phenomenon I have witnessed countless times during my 17 year career managing investments, and when I update my book, Once Upon A Trade, I will be mentioning this in a new chapter, which I will call “Markets Will Believe It BEFORE They See It.”)

So now what? Will markets continue to ramp higher to infinity and beyond?

I’m skeptical. Right now, I see the stock market as wanting to have their cake and eat it too. By that, I mean this: back in July, I wrote about the narrative prevalent in the markets, and that was stocks were allowed to have very high valuations because bond yields were so low in the US and abroad and international stocks weren’t advancing. As long as no other attractive investment alternative existed, “TINA” – There Is No Alternative – was the theme of the day.

But now that bond yields have spiked – the yield on 10 year Treasury bonds moved from 1.35% to 2.30%, while the 30 year Treasury bond moved from a low of 2.11% to 3% this week. That means bond yields are more meaningfully competitive against investment returns from stocks. It’s no longer TINA; it’s now TIAA – There IS An Alternative. But with yields up sharply, stocks are now still trying to climb to all-time highs. The market is trying to have it both ways.

So let’s think about this clearly: This is the formula analysts use to value stocks:

Interest rates are part of the value in the denominator. What this means is that, all other factors held constant, future cash flows are now worth less when your discount rate is higher (think of bond yields as being part of the denominator). For example:

See how that works? Markets don’t operate in a vacuum. Yes, in the real world, the numerator will also increase a bit with higher growth prospects, but there are many feedback loops that often restrain one variable from running wild, and this is a good example. Even though higher growth is being projected, the higher interest rates accompanying that are going to provide a headwind for stock market valuations. In addition, we still have long-term demographic hurdles and productivity declines that can’t easily be shaken off with a single burst of spending. One additional problem I see is that these huge infrastructure projects will probably take a least a year before it starts feeding into the economy, but while we wait for it, higher interest rates act like a tax that have gone up right now, and all sorts of debt like mortgage rates, auto loans, and credit cards are already moving higher and putting pressure on the overly-leveraged balance sheets of the US consumer.

In summary, I remain skeptical of this rally and favor a balanced approach that holds a meaningful amount of safe haven bonds to complement the potential for higher risk and reward from stocks. Narratives change, and this one will too.